Capital campaigns are an important initiative for higher education organizations to execute correctly. If done right, capital campaigns raise funds to support organizational goals and can have great benefits for the future of a college or university.

What is a Capital Campaign for a College or University?

A capital campaign is defined as a fundraising effort that takes place over a predetermined period.

The goal for capital campaigns will vary from the institution and can range from fundraising for the construction of new buildings to support athletics or academic programs or to providing greater institutional financial aid to needy students.

A successful campaign needs to have a character and a brand all its own so that it is distinguishable from other ongoing fundraising efforts. The website, therefore, has become the key to establishing this brand.
Campaign websites are usually subsites of the overall edu domain that allow marketers to immerse their audience in the goals and future of the college or university.

Marketing professionals know that graduates are likely to have an emotional attachment to their alma mater and marketers can strategically harness these emotions through a visual embodiment of a capital campaign. Below, we have picked out a few examples of colleges or universities that have established strong brands and messaging in their campaign websites.

8 Examples of Great Capital Campaigns Websites for Colleges and Universities:

The Aspire Capital Campaign inspires students, faculty, and the community to “aspire” for greatness. Upon arriving at the site, the user sees an image of a student holding a chalkboard that reads “I Aspire to make beautiful music”. 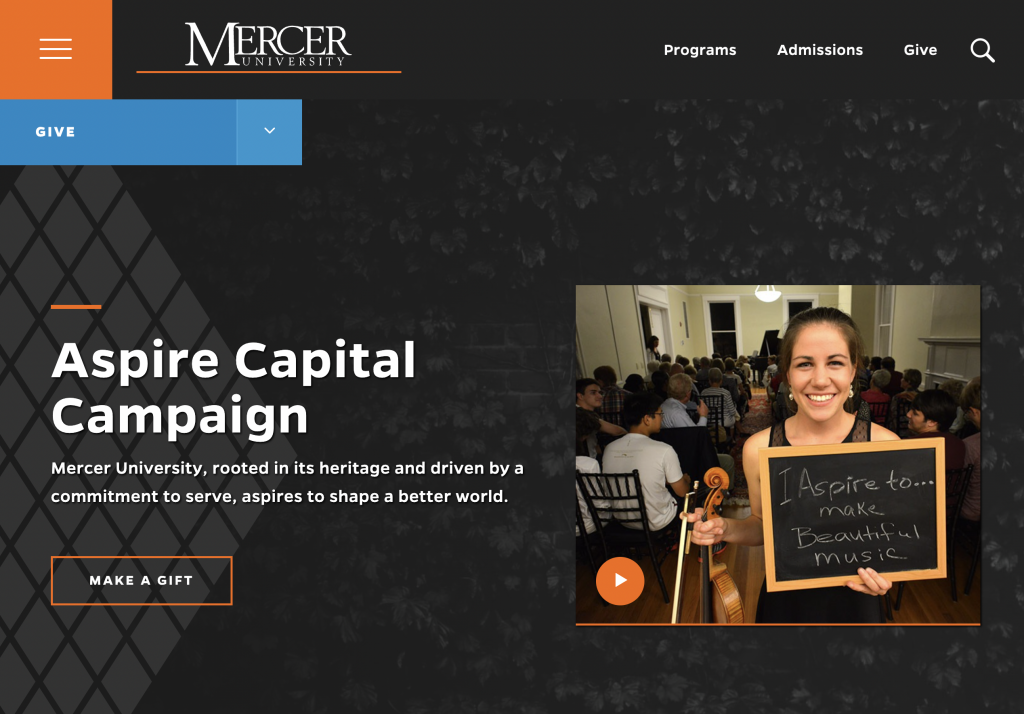 The user experience is fluid. The stories of the students, faculty, and staff speak for themselves, and the carousel gives the user the impression that the stories never end at Mercer.

The campaign site houses all of its campaign priorities in one place so users can view where their potential donations will go. Out of its $400 million goal, the university plans on using the funds generated for endowment, capital projects, and university operations.

The University of Texas at Austin – What Starts Here

The University of Texas at Austin’s campaign priorities are to support its students and faculty, build connections throughout Texas, and create innovation. The website reflects the breadth and ambition of the institution. As the user scrolls, they are met with messaging and dynamic measurement of funds raised to date. 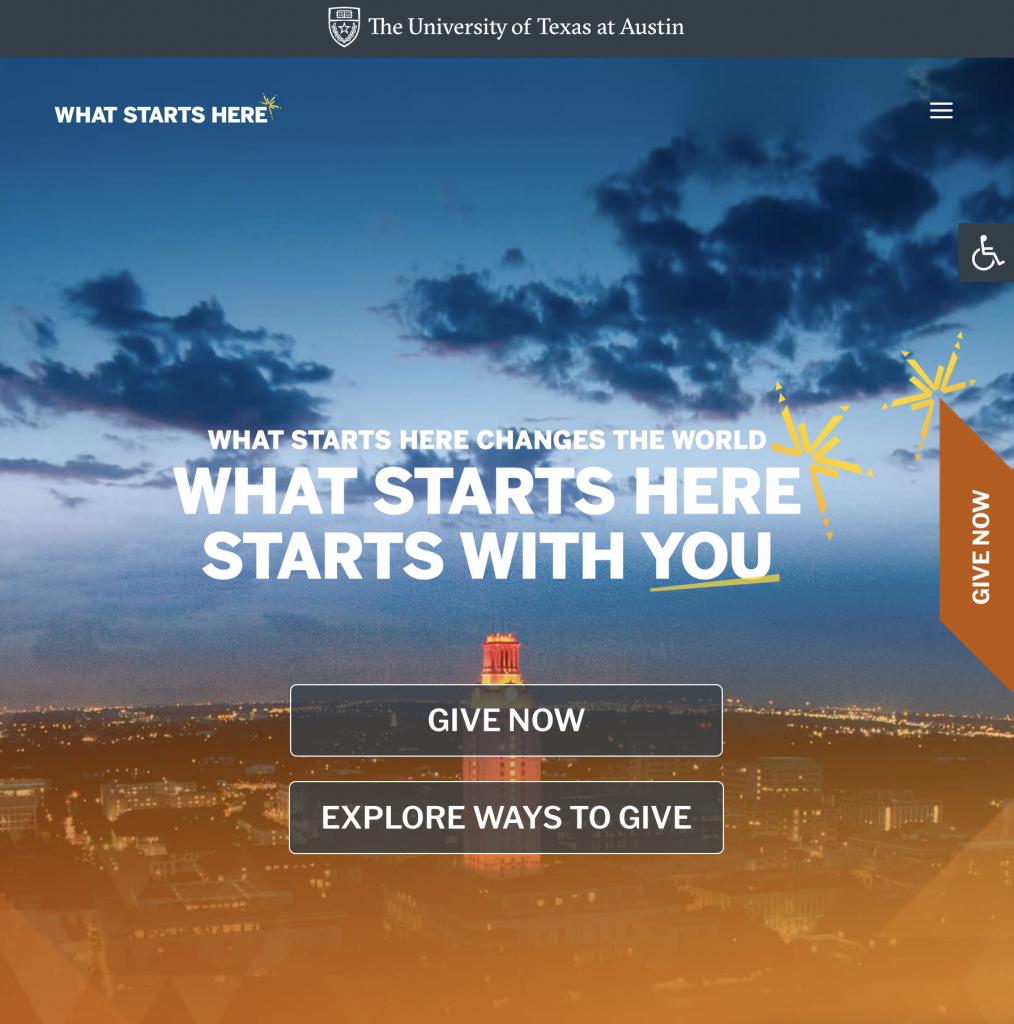 The effective use of a b-roll video in the hero section of this campaign site is memorable and attention-grabbing. Users are welcomed with clips of videos of the University of Texas at Austin community. We see a variety of areas of university life, from STEM research to engineering to biological sciences. The video’s color gradient bleeds into its signature burnt orange color.

The tagline, “What starts here”, is designed to be open-ended, allowing the user to fill in the blank.

Boldness is the hallmark of the University at Buffalo’s capital campaign and it is infused throughout their campaign website. A video in the hero space on the homepage of this campaign site captures the user’s attention. The campaign’s slogan, “Boldy Buffalo” is solidified in the viewer’s minds with its upbeat, fast pace and thick font type. 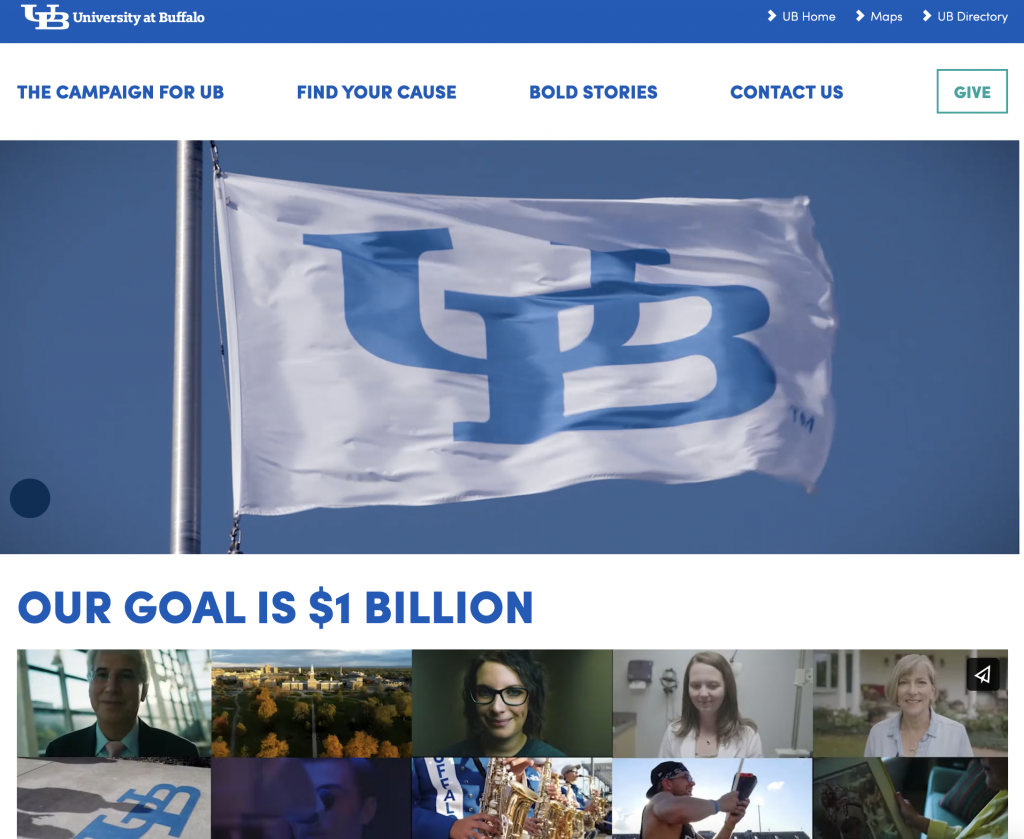 Video storytelling drives this user experience. After viewing the B-roll video in the hero, the user can watch the campaign video, which further advances the campaign goals. The user can then explore other videos and news articles that tell stories of UB and its lasting impact on its students.

This campaign site encourages users to search for their priorities for the university. Entering a keyword or phrase into the component reveals a directory of campaign causes–giving the user the feeling that the University is one step ahead, and already finds that cause important. 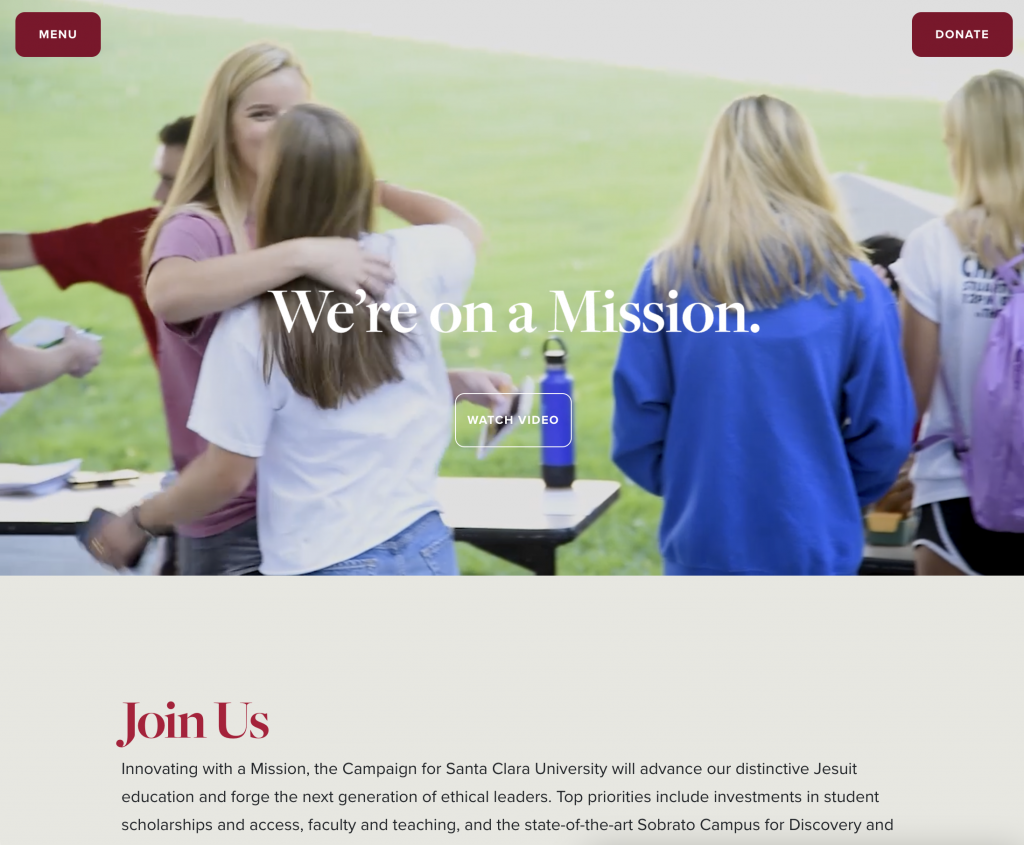 The H2 in the middle of this B-roll video states, “We’re on a mission.” This messaging draws the user in and encourages them to learn more about this mission. The user sees bold red text saying “Join Us” giving the impression that they are co-travelers on this mission.

Users can then see the impact this campaign has already achieved on Santa Clara University community, further solidifying that this is an ongoing priority. The user can also explore the different campaign priorities highlighted as they scroll, giving them more clues about what this mission entails.

Baylor University – Give Light: The Campaign for Baylor

Baylor University’s Give Light campaign aims to raise funds for three areas, endowment, expenditures, and capital projects. The Give Light campaign site embodies its slogan by including an image of a fountain on campus shooting water into sun rays, which ties into the university’s strategic plan called “Illuminate”. 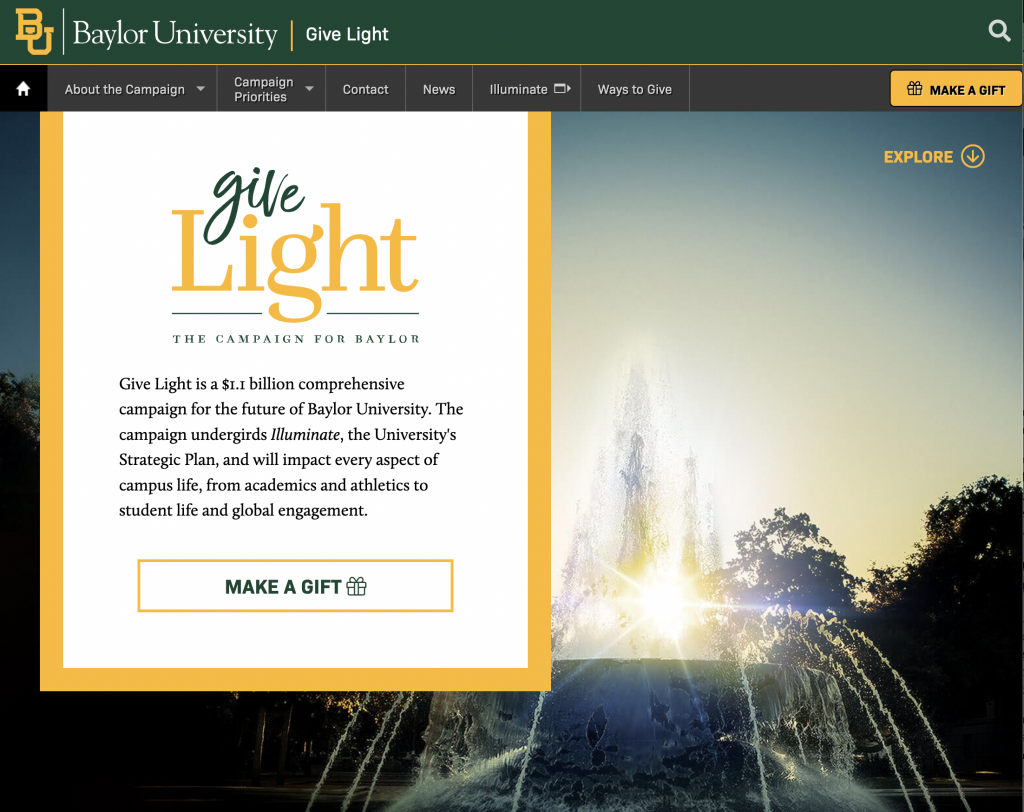 The user is met with graphics as they scroll, telling the donation data’s story visually. Baylor’s campaign priorities have their own section on the page, encouraging users to click to learn more about each institutional priority. The user experience on the page concludes with a list of recent news and provides an easy way to make a gift.

The “give light” messaging is complemented by the design choice to include the gold institutional branding.

Syracuse’s Forever Orange campaign is a model of bold simplicity. It states the mission and goals of the campaign immediately and gives users a streamlined path to 3 different CTAs. Further scrolling displays graphics that tell the data’s story and the progress the campaign is making toward its goals. 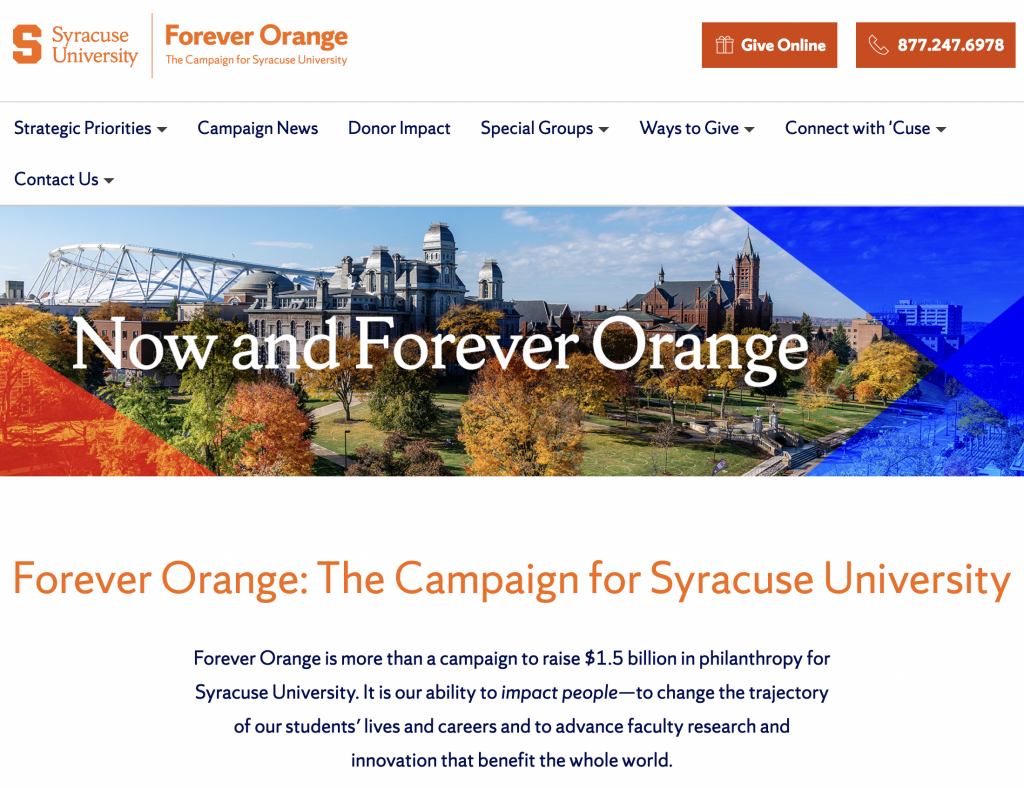 There are different actions for the user to take including a link to their ‘Faculty Excellence Program’, and news articles highlighting Syracuse’s excellence.

In addition to its CTAs, the Forever Orange campaign site also allows users to donate to establish their scholarships.

After its capital campaign, the University of Georgia updated its messaging to reflect not only its success but its gratitude. 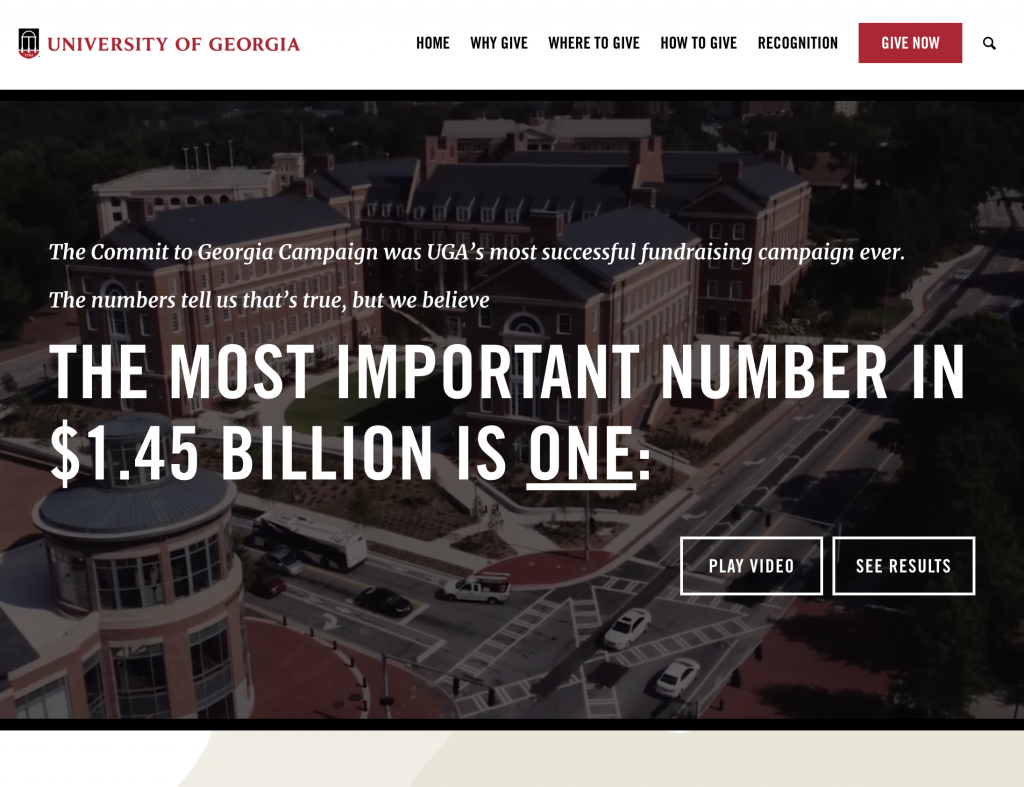 Upon arrival on the site, the messaging alerts the user that the campaign was the most successful in the University’s history. The messaging emphasizes the importance of “one” and how much of a difference “one” can make. Each use of the word “one” highlights a campaign priority.

As the user continues to scroll, they see that“one” turns into more when an action is made by more than one. This messaging echoes a sense of community within the University of Georgia, that a combination of individual action could build something incredible. The campaign site closes with a heartfelt message that aims to unite into one community with a common commitment to the University of Georgia.

The University of San Francisco’s Campaign for USF also saw success and their website is a lesson in how to use a variety of tones and visual appeals to tell a story. The tone of their campaign site shifts, as the hero displays a USF cheerleader with the H2 messaging exclaiming their accomplishment. 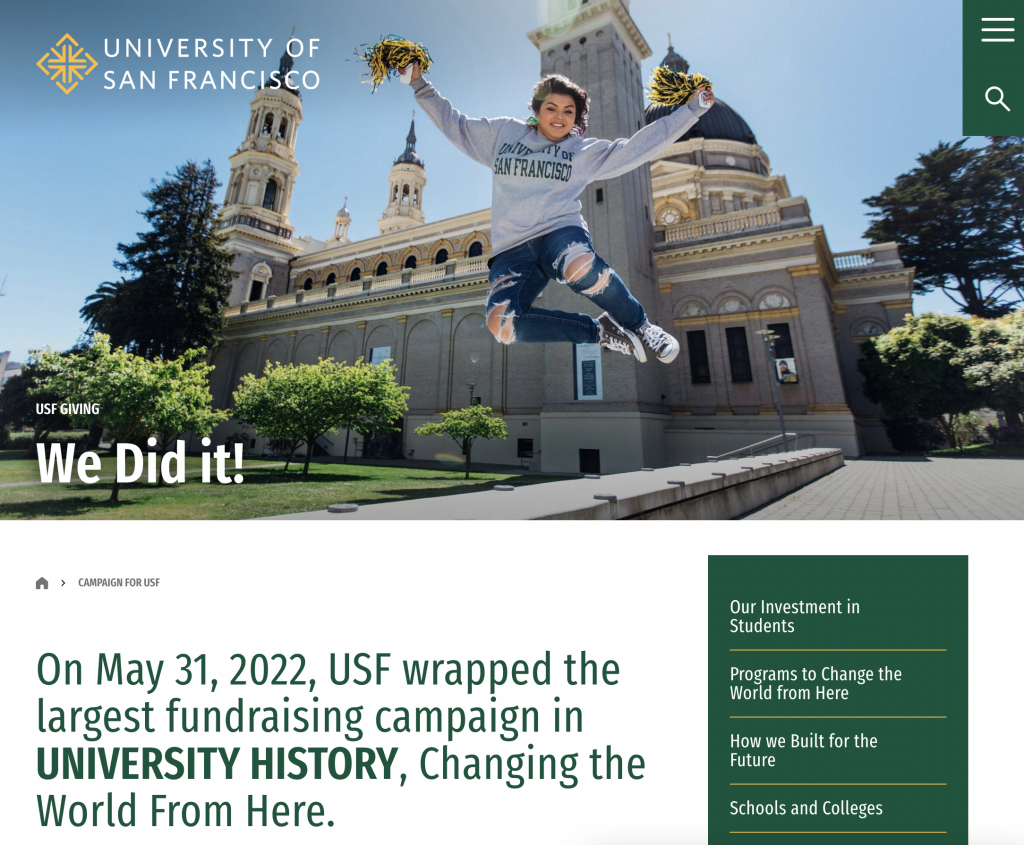 This site does a great job of summarizing the campaign goals and how the school got there. The data tells its own story by listing the dollars raised and what that means for the university in terms of growth and advancement.

The user experience concludes with the campaign video accompanied by the heading “Together, we changed the world from here”. 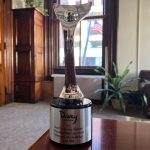 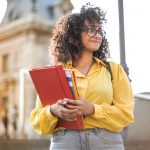 The Freakonomics of Higher Education: The Good, the Bad, and the Ugly
Comments 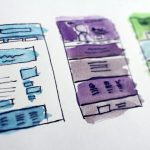 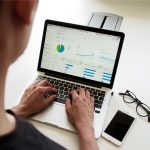